Will Robert Francis O’Rourke be the first DemocRat out of the 2020 race?

Former Rep. Robert Francis “Beto” O’Rourke (D-TX) will participate in a town hall hosted by CNN later this month as the 2020 White House hopeful is in the midst of a campaign “reboot” prompted by sagging poll numbers and dwindling media coverage.

CNN announced Monday morning that the town hall will take place May 21 at 10:00 EST at Drake University in Des Moines, Iowa. The event will be moderated by the network’s chief political correspondent Dana Bash. 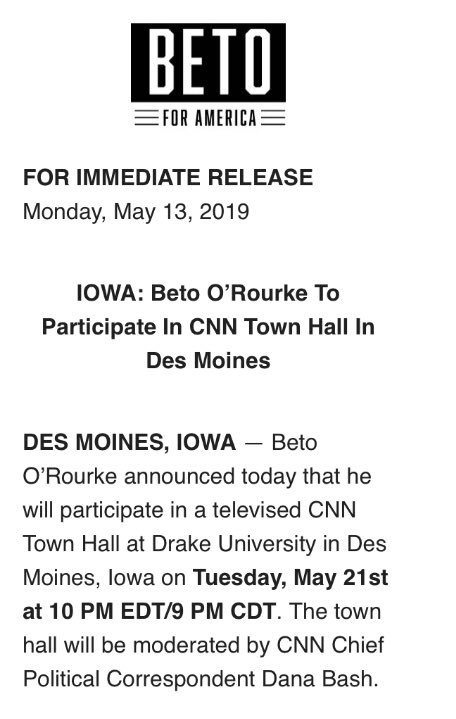 The announcement comes as the buzz surrounding O’Rourke’s candidacy has evaporated. Competing in a massive field of Democrat White House candidates, the former congressman has sagged in the polls. He has made few promises that resonated or produced headline-grabbing moments, instead driving around the country meeting with voters at mostly small events.

In a recognition that this approach isn’t working, O’Rourke is planning to try again, taking a hands-on role in staging a “reintroduction” ahead of next month’s premier Democrat presidential debate.

The Texas Democrat plans to step up his national media appearances after skipping most of that kind of exposure in recent months. He is scheduled to appear on MSNBC’s Rachel Maddow Show on Monday night and ABC’s The View the following day.

The White House hopeful acknowledges he has struggled to find his presidential campaign footing.

“I think, in part, I was just trying to keep up when I first started out,” he said after addressing about 40 people at a recent house party in Newton, Iowa. “I really feel like I’ve found my rhythm and my pace, and I just feel comfortable, and I feel like this is what I’m supposed to be doing.”

His top aides deny that a full reinvention, or “Beto 2.0,” is in the works. They note that O’Rourke plans to keep packing days with as many as half a dozen campaign events. He will still venture into off-the-beaten path locales that include rural, heavily Republican areas.

O’Rourke’s plummeting popularity has surprised many political observers, even attracting the attention of President Donald Trump. At his Panama City Beach, Florida, rally this month, the president mocked O’Rourke’s failing campaign, asking a fired up crowd: “Beto! Boy is he falling like a rock, what the hell happened to Beto?”

As Breitbart News reported, a recent Morning Consult survey shows O’Rourke is in sixth place among registered voters nationwide. A poll released over the weekend by Charleston newspaper Post and Courier says O’Rourke is tied for sixth place with technology entrepreneur Andrew Yang with a 2 percent among likely party primary voters in South Carolina.