Nineteen more reasons why we need the border wall and a secure border.

We need to stop trash like this from ever getting into America.

Federal law enforcement officials revealed during a press conference on Tuesday that 22 alleged members of the notoriously violent MS-13 street gang have been charged in a federal racketeering case, many of whom prosecutors believe participated in a series of grisly murders.

A 12-count indictment unsealed Monday afternoon alleges that members and associates of the gang murdered seven people over the last two years,” the Department of Justice said in a statement. “The indictment charges gang leaders who allegedly authorized and coordinated the murders. Also charged are gang members who allegedly murdered and attempted to murder rival gang members, those who were perceived to be cooperating with law enforcement.”

The DOJ noted that the indictment “focuses on a particularly violent subset of the gang known as the Fulton clique, which operates in the San Fernando Valley and has recently seen an influx of young immigrants from Central America.” The statement says that youngsters who wanted to join MS-13 were “required to kill an MS-13 rival or someone perceived to be adverse to MS-13 to be initiated into MS-13.”

CNN reported that 19 of the 22 alleged MS-13 gangsters “are in the country illegally and entered the country within the past four years.”

“Prosecutors waited until the defendants had all been arrested before unsealing the indictment, which alleges 16 of the defendants took part in slayings,” CNN added.

The DOJ’s statement documents one particularly horrifying murder that some of the gang members are charged with where a rival gang member “was abducted, choked, and driven to a remote location in the Angeles National Forest” where he was “dismembered, and his body parts were thrown into a canyon after one of the defendants allegedly cut the heart out of the victim’s body.”

“We have now taken off the streets nearly two dozen people associated with the most violent arm of MS-13 in Los Angeles, where the gang is believed to have killed 24 people over the past two years. This investigation has been an unqualified success,” United States Attorney Nick Hanna said. “The collaborative law enforcement effort solved several murder cases and dealt a severe blow to members of the gang who engaged in acts of brutality not seen in the region for over 20 years. The prosecution of these defendants would not have been possible without the backing of local law enforcement, including District Attorney Jackie Lacey, who has supported our efforts every step of the way and has dedicated substantial resources to ensure that all of these defendants get the justice they deserve.” 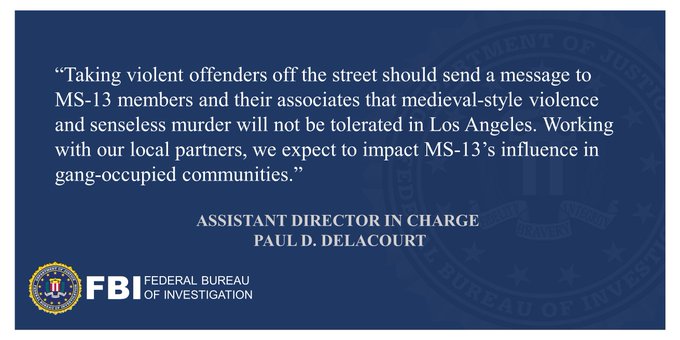 173 people are talking about this