Cory Spartacus Booker sees his campaign for president sinking faster than the Titanic and he is desperate to stay afloat.

Anti-gun U.S. Senator Cory Booker, the New Jersey Democrat who wants to be president, has expanded his recently-announced gun control plan by adding “suicide prevention” to the mix, prompting a leading national gun rights advocate to suggest his scheme faces the same hurdles as he does in his quest for the Oval Office.

“Booker has about as much chance of passing his gun control agenda as he does of being elected president.,” quipped Alan Gottlieb, chairman of the Citizens Committee for the Right to Keep and Bear Arms. 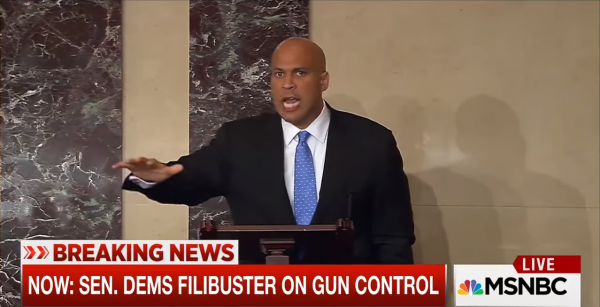 Last week, Booker announced a sweeping gun control package. This week, he’s peddling a suicide prevention program that has, at its centerpiece, the implementation of a federal licensing program.

“Cory’s proposal for gun licenses would make it more difficult for those at risk of suicide to purchase a firearm,” says his latest pitch. “If you need a license to drive a car, you should need one to own a gun. Securing a federal license would require a background check, firearm safety training, and an in-person appointment — steps that combine to keep individuals in a moment of acute crisis from acting on their suicidality. Cory’s license plan builds on what works: according to a recent academic study, Connecticut found a 15.4 percent reduction in firearm suicide rates after passing its gun permit law, while Missouri saw a 16.1 percent increase in firearm suicide rate after it repealed its state licensing law.”

Once again, Booker is likening a constitutionally-protected right with a government-regulated privilege.”

He also wants to require “safe storage” of firearms and to “incentivize extreme risk laws.” However, such “red flag” laws are coming under increased scrutiny because critics argue that they suspend due process and consider someone guilty of a crime until they prove their innocence.

Booker may think he’s gaining some traction by championing gun control, but he’s up against California Congressman Eric Swalwell in that arena.

Booker is making some hay with his threat to “Bring the fight to the NRA.” On that subject, he may need to take a number and stand in line, considering the tidal wave of bad publicity the National Rifle Association is receiving lately. There’s been the release of several finance-related documents raising questions about expenditures by NRA Executive Vice President Wayne LaPierre. And now there is a report in the Florida Bulldog about former NRA President Marion Hammer, the veteran Florida-based gun rights advocate who has been a legislative battler in Tallahassee for more than two decades as head of the Unified Sportsmen of Florida.

New York Attorney General Letitia James has launched an investigation and issued subpoenas, according to CNN.

Some observers believe the controversy could severely weaken the organization heading into the 2020 election cycle, which will be crucial for American gun owners and their Second Amendment rights. President Donald Trump has been appointing scores of conservative judges to fill vacancies on the lower federal courts, and he has successfully named two conservative associate justices to the U.S. Supreme Court.

NRA Director Lt. Col. Alan West (ret.), the former congressman from Florida, has called upon LaPierre to resign, asserting, “There is a cabal of cronyism operating within the NRA, and that exists within the Board of Directors.”

NRA officers fired back, according to the Washington Free Beacon. In a joint statement, NRA President Carolyn Meadows, First Vice President Charles Cotton and Second Vice President Lt. Col. Willes Lee (ret.) had this to say: “It is unfortunate that certain board members have resorted to making false and misleading public statements about proceedings of the NRA board of directors. As those board members know, we are not at liberty to discuss the particulars of the board of directors meeting that occurred in executive session on April 29. However, every board member was afforded the opportunity to speak openly about any issues of concern to them. To suggest otherwise is dishonorable.”

As things stand, Booker’s gun control scheme may be the least of NRA’s worries at the moment, but his proposal could cause headaches for Second Amendment activists if it gathers momentum.

Senator Booker(Delusional-NJ) the Second Amendment was written to prevent a tyrannical government like you have purposed.

Democrats love government intrusion into everyone’s life…except their own of course. 2020 Dem candidate Senator Cory Booker has brought a new one for Democrats to rally around: all gun owners and purchasers must be federally licensed. He made the statement on Monday in a desperate attempt to put himself out front in a crowded field. It was his 2nd major platform agenda since becoming a candidate.

According to Booker’s plan, current and first-time firearms buyers would seek a license at a designated office, similar to obtaining a passport. The applications would then be verified by the FBI. Current gun owners would have a transition period to obtain a federal license.

He thinks that his plan is the most comprehensive out there to stop gun violence. Actually, it would create a snarl in the Federal government. Right now there are 13 states, plus the District of Columbia, with a license requirement. Add that requirement to all 50 states plus others, and you get a nightmare…no, a quagmire of regulations. And with the number of legal gun owners in America…he’s genuinely barking up the wrong tree.

His plan also calls for many of the things that other Democrats have proposed: universal background checks for gun buyers (which is actually meant to counteract loopholes that don’t exist); the reinstitution of a ban on assault weapons and high-capacity firearm magazines – in short, Cory Booker as president would bring a gigantic destruction of our rights.

“I am sick and tired of hearing thoughts and prayers for the communities that have been shattered by gun violence — it is time for bold action.” Senator Booker

We’re sick and tired too… of listening to the agendas of those who wish to destroy the Second Amendment.

“Just when you think the 2020 field could not get anymore out there, Cory Booker comes in with a plan to use executive action filled with new restrictions and permits on law-abiding gun-owners. Votes across the country will see this as another big government grab on our constitutional rights.” Mandi Merritt, RNC spokesperson

Ridiculous analogy: The funny thing is, Sen Booker has no concept of what he was trying to say – it’s typical of liberals who use ridiculous apples and oranges analogies to push their case. He said, according to the Washington Examiner, “You need a license to drive a car, you should need one to own a gun.”

“The examples are numerous. There are no requirements for car owners to get licensed or registered at the federal level, but Booker is proposing moving to federal licensing for guns. People are allowed to drive a car without a license on their own private property, but Booker wouldn’t allow unlicensed gun owners to purchase guns for their own self-defense or sporting use on their own property. A person can obtain a driver’s license by passing an easy test, and it typically can’t be revoked for misconduct that does not involve driving, whereas Booker wants to require strict FBI background checks and to expand the categories of people whose gun rights could be stripped away by government. Driver’s licenses issued in one state are recognized by all others, and there aren’t restrictions in driving one’s car to another state, but that is not the case with guns. Also, there is no waiting period to purchase a car, as there is with a gun.”