It is good to see Governor John Bel Edwards(D-LA)standing up for the unborn instead of just wanting to murder them.

Louisiana lawmakers have passed a strict new abortion ban which will stop some women from having the procedure before they even know they are pregnant.

In a 79-23 vote on Wednesday, the Louisiana House gave final passage to a bill barring abortion once there is a detectable fetal heartbeat, as early as the sixth week of pregnancy.

The state joins Georgia, Kentucky, Mississippi and Ohio, which have all passed similar “heartbeat” bills this year.

Missouri politicians also approved an eight-week ban on abortion and Alabama has gone even further, outlawing virtually all abortions, even in cases of rape or incest.

None of the bans have taken effect, and all are expected to face legal challenges.

Louisiana Democratic governor John Bel Edwards supports the ban and intends to sign it into law despite opposition from national party leaders who say such laws are attacks on women.

He said in a statement after the ban’s passage: “I know there are many who feel just as strongly as I do on abortion and disagree with me – and I respect their opinions.

“As I prepare to sign this bill, I call on the overwhelming bipartisan majority of legislators who voted for it to join me in continuing to build a better Louisiana that cares for the least among us and provides more opportunity for everyone.”

Abortion opponents are pushing new restrictions on the procedure in the hope a case will make its way to the high court, and two new conservative justices appointed by US president Donald Trump could help overturn the US Supreme Court’s 1973 Roe V Wade decision that legalised abortion nationally.

Louisiana’s prohibition would only take hold if neighbouring Mississippi’s law is upheld by a federal appeals court. A federal judge temporarily blocked that Mississippi law on Friday.

Abortion rights activists said Louisiana’s bill would effectively eliminate abortion as an option before many women realise they are pregnant, calling the proposal unconstitutional.

The legislation includes an exception from the abortion ban to prevent a pregnant woman’s death or “a serious risk of the substantial and irreversible impairment of a major bodily function” – or if the pregnancy is deemed “medically futile”.

However it does not include an exception for a pregnancy caused by rape or incest. 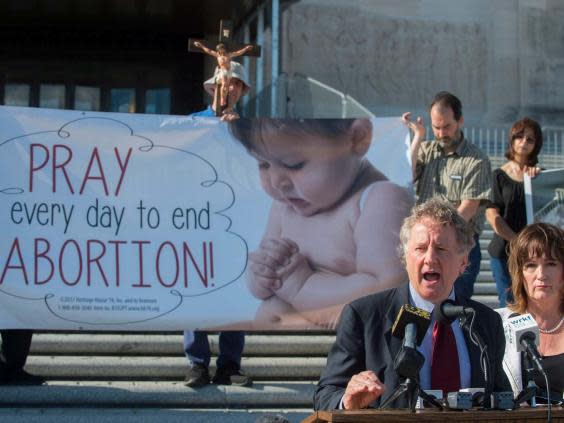 A doctor who violates the prohibition under the bill could face a prison sentence of up to two years, as well as having their medical licence revoked.

Although similar abortion bans have drawn sharp criticism from Democrats nationwide, Louisiana’s proposal won wide bipartisan support and was sponsored by a Democrat from the north-west corner of the state, Senator John Milkovich.

Support from Mr Edwards, who is running for re-election this autumn against two Republicans, is expected to help shore up his position with some voters in his conservative home state, even if it puts him at odds with national Democratic Party leaders and donors.

The ban is one of several bills that Louisiana politicians are advancing to add new restrictions on abortion.

Another bill nearing the governor’s desk would limit where medication-induced abortions can be performed to the state’s three licensed abortion clinics.

Reacting to the news Mr Edwards was poised to sign the bill, Allison Galbraith, second vice chair of Maryland Democratic Party, said: “We keep a big tent, but I’ve no room for being so incompetent or spineless that you don’t get or don’t care what these bills do.”

Adam Best, an activist and co-host of The Left podcast, tweeted: “Democrats are the party of civil rights and social justice. Being pro-choice is non-negotiable.

“You can’t have DINOs like John Bel Edwards making draconian abortion laws. Should be zero tolerance for Dems like that.”

Krishan Patel, who described himself as a progressive Democrat from Irvine on his Twitter profile, said: “If John Bel Edwards wants to make the government force a girl violently raped by her own father to carry that pregnancy out to term and give birth, then he does not deserve any Democratic support.”

Leana Wen, president of the Planned Parenthood Action Fund, added that the law would “devastate the health and well-being of women and families”.

While Jacob Taber tweeted: “The Democratic Party has no room for misogynists who want to police women’s bodies.”

The chief executive of Walt Disney said it would be “very difficult” for the media company to keep filming in Georgia if a new abortion law takes effect.

Bob Iger said the law would mean many people would not want to work in the US state.

The law bans abortion once cardiac activity can be detected, which can be as early as six weeks.

If it survives court challenges, the law is due to take effect on 1 January.

Disney has shot blockbuster films such as Black Panther and Avengers: Endgame in the state.

Netflix has also warned it would “rethink” its film and television production investment in Georgia if the law goes into effect.