The DemocRats with this contempt vote want to charge Attorney William Barr with not violating the law by releasing the unredacted grand jury testimony.

What a damned bunch of hypocrites.

One thing I can virtually guarantee in all of this: The Attorney General will not be moved one inch by a impending contempt vote in the House of Representatives.  Nevertheless, this preposterous piece of political theater demonstrates the fundamental unseriousness of Jerry Nadler and House Democratic leaders, who very much seem desperate to offer morsels of political catharsis to their enraged base, setting aside the merits of the case.  In order to keep their tap dance on impeachment going, they need to signal that they share their core voters’ indignation.  Thus, as I’ve argued before, Barr derangement is being used as an emotional place-holder for impeachment proceedings:

1,851 people are talking about this

The House will vote next week to hold Attorney General William Barr and former White House counsel Don McGahn in contempt of Congress for defying congressional subpoenas, according to multiple Democratic sources. The resolution would clear the way for the House Judiciary Committee to take Barr and McGahn to court to enforce their subpoenas and are a crucial step for Democrats seeking to accelerate their obstruction of justice investigation against President Donald Trump…Barr has failed to comply with a subpoena for special counsel Robert Mueller’s fully unredacted report and underlying evidence…The vote, supported by Speaker Nancy Pelosi, Hoyer and other top members of House leadership, will authorize the House to hold the two men in civil contempt. Democrats will forgo an effort to hold them in criminal contempt.

Texas freshman Republican Dan Crenshaw calls out this stunt for what it is:

We’re really doing this? We’re all supposed to just ignore the fact that Barr is bound by federal law to protect grand jury information?

Are we pretending there might be some bombshell hidden in there?

This is dishonest politics meant to discredit Barr.

12.5K people are talking about this

Barr has ordered a comprehensive review of the origins of the DOJ’s Trump probe, resulting in angry gnashing of teeth within certain precincts.  He’s comported himself responsibly, even amid overheated and spurious allegations of lies and cover-ups.  There is simply no question that there is a concerted effort underfoot to discredit him by any means necessary.  Crenshaw’s point about ‘hidden bombshells’ is also a good one.  Nobody — literally nobody — is seriously arguing that the extremely limited redactions, made in concert with Mueller’s team, are blotting out some dramatic development implicating the president.  As I wrote last month, “the notion that they decided to bury some smoking gun evidence against the president via a bogus redaction is ludicrous — especially considering how acutely sensitive Mueller and some of his associates seem to have been to any public perception that they were too soft on Trump.”  Even more revealing is this fact, which we relayed several weeks ago: 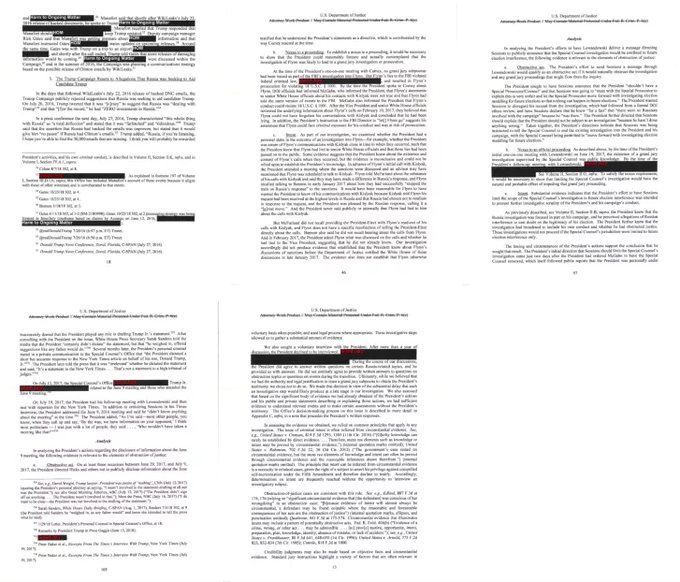 “As of this writing, not one of the six Democrats granted access to what amounts to 99.9 percent of volume II of the Mueller report, which details the president’s behavior as it relates to obstruction of justice, have taken the opportunity to examine it.” https://www.nationalreview.com/2019/05/mueller-report-volume-ii-available-top-congressional-democrats/ …

The Democrats who’ve have access to a less redacted version of the report didn’t bother to go read it, even as House Democrats engaged in the silly theater of a marathon reading of the publicly-available report (something they could only do thanks to Bill Barr, incidentally).  All in all, there’s a good reason why liberal law professor Jonathan Turley excoriated Democrats’ contempt push against Barr as pursuing “the weakest possible case” imaginable, underscoring Crenshaw’s first argument above:

Faced with a report that rejected the collusion theories of their running narrative, Democrats want to focus on those 2 percent of redactions rather than over 400 pages of findings. So Congress now will ask a court to find civil contempt for Barr refusing to release grand jury information. The District of Columbia Circuit Court of Appeals recently rejected a district court claim to have the “inherent supervisory authority” to disclose grand jury matters because of great public interest…I testified that they were asking Barr to commit to a potential criminal act to secure his own confirmation. The report inevitably would contain some grand jury material, which under the law is information that cannot be publicly released without a court order. It is a crime to unveil such information.

In short, flailing, frustrated Democrats will seek to hold Attorney General Barr in contempt of Congress for declining to violate the law, in accordance with their politically-motivated, substance-free wishes. Bold strategy.  I’ll leave you with House Majority Whip James Clyburn pulling a 180 and talking down impeachment proceedings.  On Sunday, he was asked, “it sounds like you think that the President will be impeached, or at least proceedings will begin in the House at some point, but just not right now?”  He replied, “yes, that’s exactly what I feel, I think we’ve already begun it.”  Now?  Nevermind: