Personally, I do not believe anything the WHO has to say.

The World Health Organization fought back against rumors this week and said it does not recommend against the use of ibuprofen to help with coronavirus symptoms.

“At present, based on currently available information, WHO does not recommend against the use of ibuprofen,” read a graphic attached to a tweet on the subject Wednesday.

We are also consulting with physicians treating COVID-19 patients and are not aware of reports of any negative effects of ibuprofen, beyond the usual known side effects that limit its use in certain populations.”

Q: Could #ibuprofen worsen disease for people with #COVID19?

A: Based on currently available information, WHO does not recommend against the use of of ibuprofen. 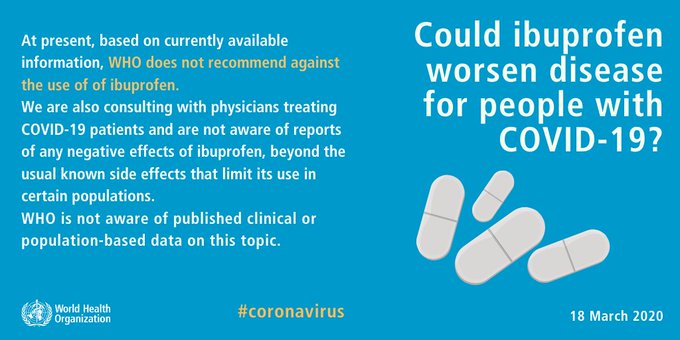 7,724 people are talking about this

The statement came after France’s health ministry suggested the popular painkiller could worsen the effects of coronavirus.

Health Minister Olivier Veran, who is also a neurologist, tweeted Saturday, “Taking anti-inflammatory drugs (ibuprofen, cortisone, …) could be an aggravating factor of the infection.

His concerns stemmed from some French COVID-19 patients experiencing severe side effects because of the over-the-counter drug, NPR reported.

A commentary published in The Lancet medical journal also stirred questions about ibuprofen’s safety by hypothesizing how various medications could increase the risk of coronavirus infection.

According to the commentary’s author, taking ibuprofen might increase the number of ACE2 receptors on a cell, making someone more vulnerable to infection.

Rachel Graham told NPR that even if people have low levels of ACE2, they are still susceptible to the virus.

When asked about the study, WHO spokesman Christian Lindmeir told reporters in Geneva that experts were “looking into this to give further guidance,” according to Science Alert.

“In the meantime, we recommend using rather paracetamol, and do not use ibuprofen as a self-medication. That’s important,” he said.

A spokesman for Reckitt Benckiser, a British pharmaceutical company that makes Nurofen, said the company is aware of the concerns and does “not currently believe there is any proven scientific evidence linking over-the-counter use of ibuprofen to the aggravation of COVID-19.”

“Consumer safety is our number one priority,” he said. “Ibuprofen is a well-established medicine that has been used safely as a self-care fever and pain reducer, including in viral illnesses, for more than 30 years.”

WHO has since released its updated statement following “a rapid review of the literature” and finding there is no published scientific evidence that Ibuprofen worsens the virus, CNN reported.

The U.S. Food and Drug Administration also issued a statement that it is “not aware of scientific evidence” connecting ibuprofen to worsening COVID-19, according to CNN.

“The agency is investigating this issue further and will communicate publicly when more information is available,” the FDA said. “However, all prescription NSAID labels warn that ‘the pharmacological activity of NSAIDs in reducing inflammation, and possibly fever, may diminish the utility of diagnostic signs in detecting infections.