I can not wait to hear the liberal whining about the people in this poll is racist.

“Fifty-one percent of registered voters in a new Morning Consult/Politico survey said they supported Immigration and Customs Enforcement raids aimed at arresting and deporting immigrants who are living in the country illegally with outstanding deportation court orders,” Joanna Piacenza works.

“Immigration has overtaken health care as the No. 1 issue in the country, according to a June 26-29 Harvard CAPS/Harris Poll,” Piacenza notes. In addition to that poll, “Forty-five percent of voters in the new survey said the United States is facing a crisis of illegal immigration at the U.S.-Mexico border, up 3 points from a January 2019 poll.”

“Keeping immigration in the headlines helps President Trump with his base in the run-up to the 2020 election,” Tyler Sinclair, Morning Consult’s Vice President, told Politico. “Security issues track as the No. 1 issue when Republican voters head to the polls.” 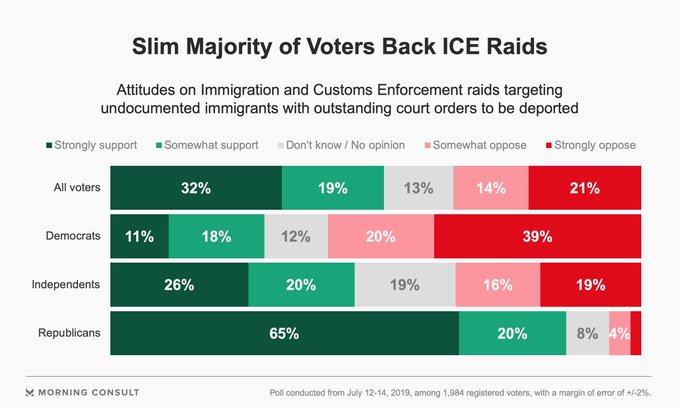 1,277 people are talking about this

The raids were supposed to occur over this past weekend, but it is unclear whether or not they actually did.