President Trump is doing everything he can about the Coronavirus.

A new poll shows a majority of Americans now approve of President Donald Trump’s handling of the coronavirus outbreak.

According to the results of an ABC News/Ipsos poll released Friday, 55 percent of those surveyed said they approved of Trump’s handling of the spread of the coronavirus crisis, while 43 percent said they disapproved.

The numbers have shifted dramatically in just one week as the president and his team have worked around the clock to manage the situation.

Friday’s numbers are a near reversal from a week ago, when the same poll found 54 percent of those surveyed said they disapproved of Trump’s handling of the situation, while just 43 percent approved.

BREAKING: Two-thirds of Americans are concerned that they or someone they know will be infected with the novel coronavirus, according to new @ABC News/Ipsos poll. https://abcn.ws/3d5AnZw 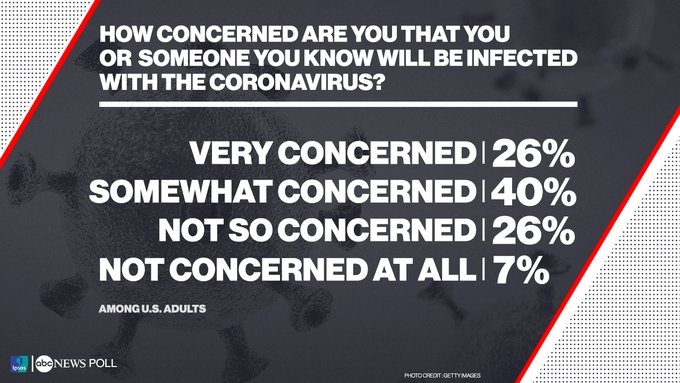 Two-thirds of Americans concerned about contracting coronavirus, as country grapples with growing…

Two-thirds of Americans are concerned that they or someone they know will be infected with the novel coronavirus, according to a new ABC News/Ipsos poll.

96 people are talking about this

Over the past week, the president and his administration have taken drastic measures to stop the spread of the virus and assure the public that the full resources of the federal government are at work.

Trump has also been highly visible during daily media briefings from the White House.

While a number of Democrats have harshly criticized Trump’s handling of the crisis in apparent attempts to gain political traction, it appears that many Americans have nonetheless have decided Trump’s response has been appropriate — which could explain the 12-point swing in favor of the president.

This week’s poll also surveyed Americans about how the global pandemic has changed their daily lives and working habits.

Almost three-quarters of respondents said the threat of the virus has made them alter plans or schedules, as 72 percent reported postponements and/or cancellations.

Of those reporting disruptions, 57 percent said they had scrapped plans to go out for dinner, while 35 percent have cancelled a vacation

The health crisis has also altered plans for many to vote, as 11 percent of those surveyed said they had refrained from in-person voting.

A week ago, 73 percent of those surveyed by ABC News/Ipsos reported not cancelling or postponing life events, while that number dropped to 28 percent in this week’s poll.

When asked to describe their current working situation, 41 percent said in the most recent poll that they are not working, while 17 percent reported working from home. Only 36 percent of those surveyed said they are still working from their regular workspace outside of the home.

The threat of the being infected has also increased anxiety among respondents, as 79 percent reported being either very concerned or somewhat concerned about either them or someone they know contracting the virus.

JUST IN: 55% of Americans approve of Pres. Trump’s management of the coronavirus crisis, compared to 43% who disapprove, according to new @ABC News/Ipsos poll. https://abcn.ws/2wd0vkB 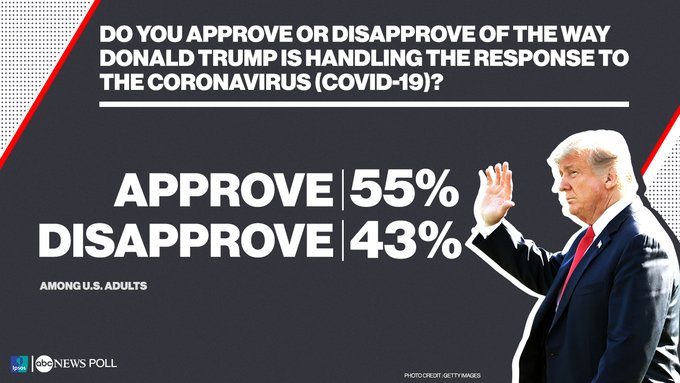 NEW: 79% of Americans say they are concerned that they or someone they know will be infected by coronavirus, which is a significant uptick from last week when 66% said the same, per new @ABC News/Ipsos poll. http://abcn.ws/2wd0vkB 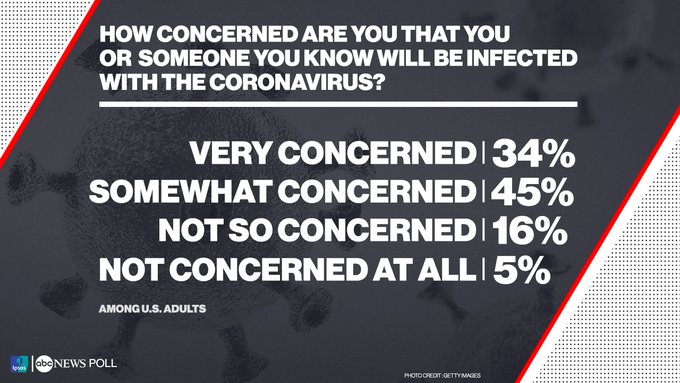 81 people are talking about this

The ABC News/Ipsos poll was conducted between March 18 and 19, and surveyed a total of 512 adults, with a margin of error of plus- or minus-5 percentage points.