Alexandria Occasional-Cortex is reacting like a typical swamp monster.

New York Rep. Alexandria Ocasio-Cortez is running scared and working to cover her tracks now that the walls are closing in on her.

It started when journalist Luke Thompson discovered that the 29-year-old’s boyfriend had a campaign email address.

Ocasio-Cortez insisted that he only had the campaign email address for the purpose of checking her calendar and was not on her staff.

But then it was discovered that her boyfriend did have a job working for her chief of staff during the campaign.

And on Monday it was discovered that that same chief of staff appears to have moved $1 million from a PAC he and Ocasio-Cortez run to his private companies.

And now in an effort to cover her tracks apparently, she has gotten rid of the original email address that started the investigating. 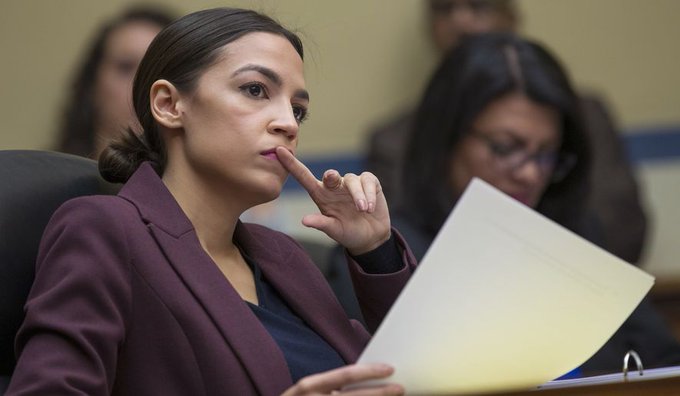 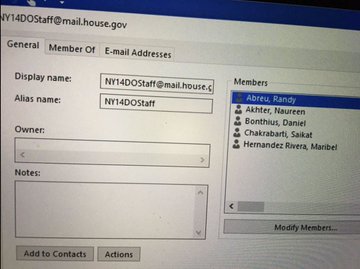 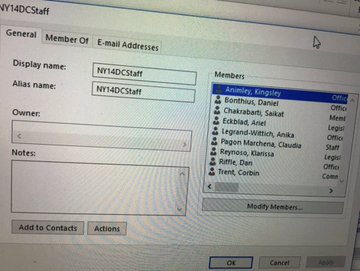 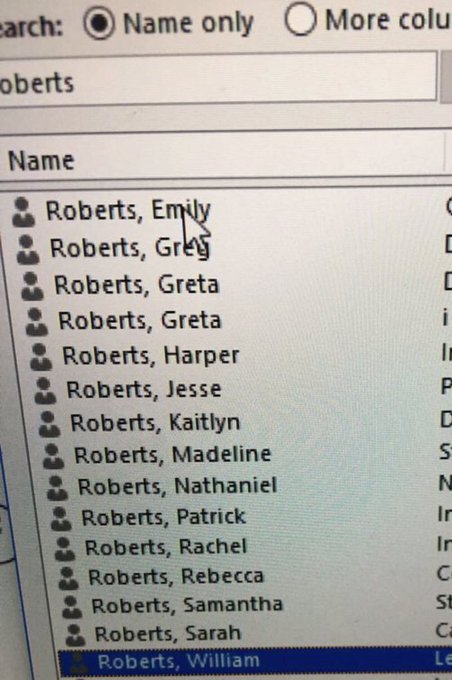 691 people are talking about this

Chakrabarti’s campaigns raised $3.3 million and diverted more than $1 million to his companies, the Washington Examiner reported.

He helped found both Brand New Congress PAC and Justice Democrats, with the goal of bringing new and progressive members like Ocasio-Cortez, a self-described Democratic socialist, to Congress.

“None of that makes any sense,” former FEC lawyer Adav Noti of the Campaign Legal Center told the publication. “I can’t even begin to disentangle that. They’re either confused or they’re trying to conceal something.”

Ocasio-Cortez responded to an inquiry from The Washington Times on Monday in her usual defiant manner.

“He’s not on my payroll. They were not working for me and they are two separate entities here,” she said. “This is the difference between an LLC and a PAC.”

But she is in her own jam with some chicanery that was done between the PACs and her campaign for Congress, as we reported.

New York Rep. Alexandria Ocasio-Cortez and her chief of staff Saikat Chakrabarti could be facing prison time for a major campaign finance violation.

The two were running a PAC that supported her campaign in the 2018 election which is a major no no and now they could be forced to pay the consequences, The Daily Caller reported.

Democratic Rep. Alexandria Ocasio-Cortez and her chief of staff Saikat Chakrabarti obtained majority control of Justice Democrats PAC in December 2017, according to archived copies of the group’s website, and the two appear to retain their control of the group, according to corporate filings obtained by The Daily Caller News Foundation. If the Federal Election Commission (FEC) finds that the New York Democrat’s campaign operated in affiliation with the PAC, which had raised more than $1.8 million before her June 2018 primary, it would open them up to “massive reporting violations, probably at least some illegal contribution violations exceeding the lawful limits,” former FEC commissioner Brad Smith said.

Ocasio-Cortez never disclosed to the FEC that she and Chakrabarti, who served as her campaign chair, controlled the PAC while it was simultaneously supporting her primary campaign, and former FEC commissioners say the arrangement could lead to multiple campaign finance violations. The group backed 12 Democrats during the 2018 midterms, but Ocasio-Cortez was the only one of those to win her general election.

Former FEC Commissioner Hans von Spakovsky told The Daily Caller News Foundation “If the facts as alleged are true, and a candidate had control over a PAC that was working to get that candidate elected, then that candidate is potentially in very big trouble and may have engaged in multiple violations of federal campaign finance law, including receiving excessive contributions.”

And another former commissioner of the FEC, Brad Smith, said if “a complaint were filed, I would think it would trigger a serious investigation.”

“At minimum, there’s a lot of smoke there, and if there are really only three board members and she and [Chakrabarti] are two of them, sure looks like you can see the blaze,” Smith said. “I don’t really see any way out of it.”

Smith also told the DCNF that both Ocasio-Cortez and Chakrabarti could face serious fines and significant prison time if a complaint is filed.

“It looks like the campaign and PAC are under common control and the PAC was funding campaign staff and activities as an alter-ego of the campaign committee, which would be a blatant abuse of the PAC rules,” Charlie Spies, a Republican election attorney, said.

Justice Democrats stated on its website from December 2017 until two weeks after Ocasio-Cortez’s June 2018 primary victory that she and Chakrabarti held “legal control” of the PAC, and corporate filings obtained by TheDCNF show that the two still serve on the three-member board of Justice Democrats on paper.

Political committees are affiliated if they are “established, financed, maintained or controlled by … the same person or group of persons,” federal election law states.

Ocasio-Cortez credits Justice Democrats for recruiting her to run for Congress in May 2017. She tweeted that the group got her campaign up and running by helping “with all that stuff a normal person would need (what forms to fill out? etc).”

Ocasio-Cortez paid a combined $27,293 to Justice Democrats and to what was effectively its predecessor, Brand New Congress LLC, for administrative, staffing and overhead services from the time she declared her candidacy to her shock primary victory, according to FEC records. Ocasio-Cortez only began paying her staffers directly through her campaign beginning in March 2018, according to her campaign reports.

She also proves that P.T.Barnum was correct when he said: “There’s a sucker born every minute.”

Participants in a fun run organized by Alexandria Ocasio-Cortez were unaware their registration fee was going towards her campaign.

The event on Saturday was billed as a family fun run supporting Ocasio-Cortez’s Green New Deal’ but a spokesman later revealed it was a campaign fundraiser.

“The site says it’s to benefit her environmental plan,” said one supporter who would not give his name. “If it is going to go directly to her campaign they should have said so.” 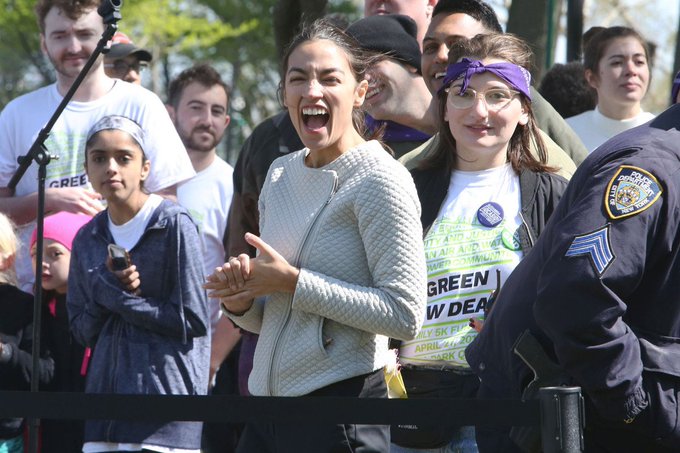 But many of the 400 runners didn’t realize their $30 registration fees were going directly into the lawmaker’s campaign coffers.

“We’re getting together for our own health, for our planet’s health … and to fight for the Green New Deal together,” the freshman Democrat told the participants before they set off.

Environmentally conscious supporters — who jogged through Astoria Park alongside a beaming, strolling AOC — believed their money was going to help save the planet.

The saddest part is that 99% of them don’t realize they were played for fools and the few who do realize it, will justify it by saying Alexandria Ocasio-Cortez didn’t mean to make it that hard to figure out it was a donation directly to her campaign.

AOC raised over $11K for campaign in Queens ‘fund run’

Rep. Alexandria Ocasio-Cortez held a 5k in Queens Saturday that she promoted as supporting her Green New Deal. But many of the runners didn’t realize their $30 registration fees were going directly

Another bait and switch. One of the oldest tricks in the Socialist hand book. Thanks AOC. The next trick is the Green New Deal switched to Bankrupt USA. Then Medicaid for all switch to after age 68 no treatment. Free stuff cost to much.

Imagine that! This is all a big popularity show for @AOC that’s pushing a leftist political agenda. If @RepAOC was truly concerned about the people’s issues, she would do a lot more homework (e.g. about #socialism), before opening her foot-shaped mouth. #PhoneyBaloney

This is the worst kind of political deceit, as most of these kinds of events are used for charity and not for the politician’s war chest.