A interesting piece of history.

Whether you’re a DIY master, contractor or superintendent, you undoubtedly have a tape measure in your toolbox. With its compact design and ability to measure up to 100 feet in length at various fractions of an inch, it is one of the most well-known and often-used tools in construction.

With July 14th being National Tape Measure Day and 2020 being the 152nd anniversary of its American patent, let’s take a look at the history of the tape measure and its modern uses.

HOOP SKIRTS AND THE $300 TAPE MEASURE

In the early 1800s, many women in Britain wore hoop skirts – giant skirts with flat metal fashioned into a circle to create huge silhouettes. By holding a large bell shape, women were able to move around more freely while allowing staying cooler as the clothing was lighter than previous skirts. However, as quickly as the skirts came into fashion, they quickly left.

As hoop skirts left the fashion scene and production of the product slowed, British metalworker James Chesterman came up with a use for the flat metal used to construct the skirts. In 1829, Chesterman patented a spring tape measure that utilized flat metal with marked measurements. The metal was cased inside of a donut-shaped leather case that made the tool easy to transport and use.

After receiving a patent for his invention, Chesterman began to sell the product for $17 in the United States. While that seems reasonable in today’s world, that is equal to roughly $300 at the time! With a tool that cost hundreds of dollars to purchase, it makes sense that an inventor would later patent an updated version of the product.

In 1868, a patent was registered in New Haven, Connecticut to Alvin J. Fellows for a new version of the tape measure. This new tape measure had a “spring-click” that allowed the tape to be locked into place when it was extended. If you’re familiar with the modern tape measure, you are aware of its feature to hold its place when extended at any distance. This feature allows the user to mark several increments within a set distance – crucial in construction work.

Still, the tape measure was not yet used widely within the construction industry. The carpenter’s folding wooden ruler remained the most popular product. At $0.60 a ruler, its low price made it the most attainable tool until the 1940s.

By then, the price of the tape measure had decreased, and people began to discover the convenience, accuracy and usability of the tool. From that point on, the tape measure continued to be improved on as people discovered its vast uses. 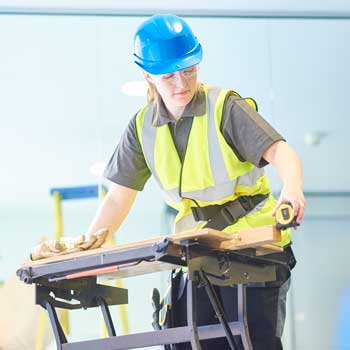 The modern tape measure has continued to be improved upon and now has a wide range of functionality for use in construction. With various lengths, most commonly 12, 25 and 100 feet, there are tape measures for several different uses and purposes.

The 25-foot tape measure is often called builder’s tape as it is commonly used in the construction field. It often features measurements marked in feet and 16-inch increments. This differs from the 100-foot tape measure which is usually made of cloth and is used to mark exterior measurements in larger builds.

With so many variations and features in the thousands of different tape measures on the market, it is impossible to list every use of the tape measure. From carpentry to site surveying to its continued use in the fashion industry – tape measures are everywhere!

So, on National Tape Measure Day, take out your favorite tape measure and appreciate the history and capability of this simple yet powerful tool.