It is time that Pencil Neck Adam Schiff(Delusional-CA)needs to be investigated.

As William Shakespeare wrote in Hamlet, “Something is rotten in the state of Denmark.” Something’s rotten with Adam Schiff, more rotten than usual.  At the same time, the whistleblower was filing his report, Adam Schiff sent a staffer to Ukraine to meet its former President and an organization whose staff included the co-founder of Crowdstrike. And just wait until you see who sponsored that TRIP.

This ‘whistleblower’ issue is shaping up to look an awful lot like the Kavanaugh shakedown all over again, isn’t it?

Trending: Read The FBI 2018 Crime Report- You Will Ask ‘What Gun Violence Epidemic?’

“The gravamen of the offense here is the president using the power of his office to coerce a foreign nation into helping his presidential campaign to once again interfere in our election, and at the same time withholding foreign aid that country so desperately needs to fight off who? The Russians,” he said.

“The situation demands that we move forward with the inquiry.”
Source: NBC

Yeah… hold that thought there, Rep. Shifty. Maybe YOU are the one that needs some thorough investigating.

The same piece of Schiff whose privileged access to classified information gave him the ability to make accusations nobody could question (like the bogus ‘more than circumstantial evidence‘ he claimed to have that Russia colluded with Trump… despite a Mueller investigation tasked to find precisely that evidence coming up empty) is in right in the thick of something else, now.

He’s up to his neck in the Ukraine controversy. And an interesting smoking gun has arisen: 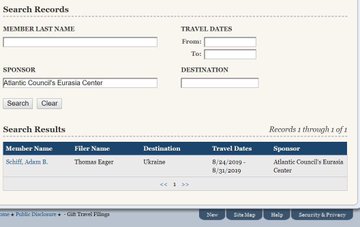 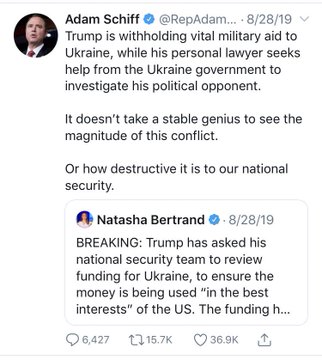 9,431 people are talking about this

One of Schiff’s staffers took a trip to Ukraine in August. What an amazing coincidence!

And that was not long before the rules allowing for secondhand and hearsay evidence to be accepted for whistleblower use! Isn’t it amazing that all this is brewing just before the release of that highly-anticipated IG report into the origins of the Spygate scandal?

So what, exactly did Schiff’s staffer DO in his visit to Ukraine? He spoke with the FORMER President. The guy with strong Obama ties.

They met directly with former Ukrainian President Petro Poroshenko, who lost to current president Volodymyr Zelensky in a landslide 73-25 victory

1,940 people are talking about this 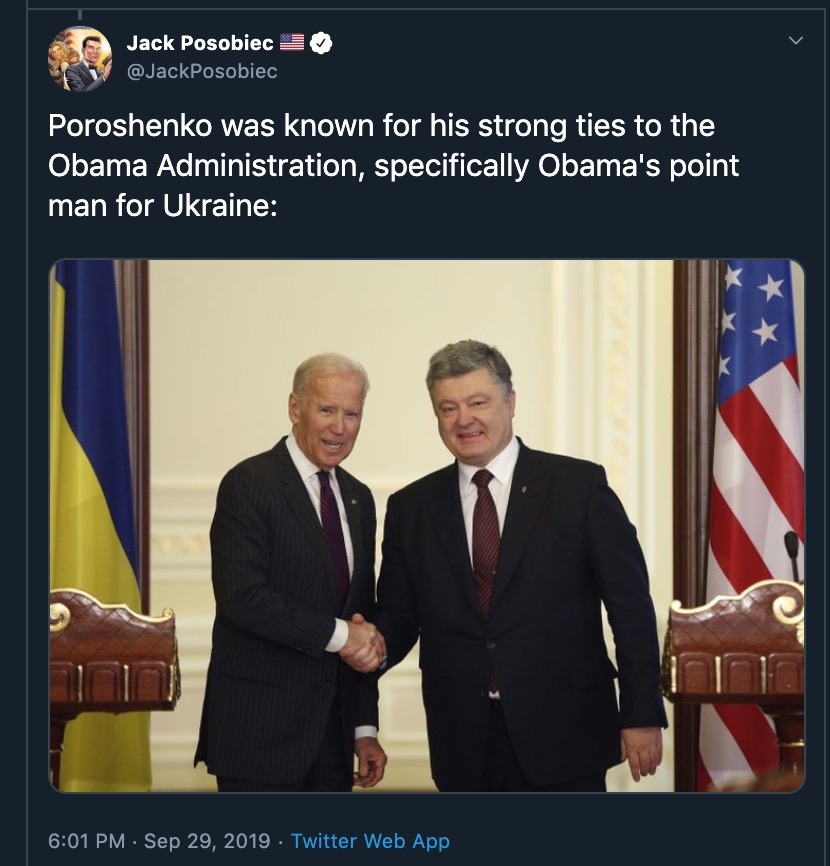 Jack noticed something interesting about the timeline, too.

When I looked at the SPONSOR of that trip, an awfully familiar name popped up.

A couple of key names show up there. One of them is Clinton another is Pinchuk. There are some tight Russiagate ties that could interest our readers in an article from which the following quote is only the tip of the iceberg:

Although exact numbers are not clear, reports filed by the Clinton Foundation indicate that as much as $25 million of Pinchuk’s “charitable donations” went to the Clinton organization.
Source: TheMarketsWork

But think back to the actual transcript of Trump’s phone call with the Ukrainian president. What was the favor… it wasn’t Biden — they didn’t even talk about him until later. Trump wanted to know something about it… Crowdstrike and the hacked(?) Hillary server that Feds never actually got their hands on.

I would like you to do us a favor though because our country has been through a lot and Ukraine knows a lot about it. I would like you to find out what happened with this whole situation with Ukraine, they say Crowdstrike… I guess you have one of your wealthy people… The server, they say Ukraine has it. There are a lot of things that went on, the whole situation. I think you’re surrounding yourself with some of the same people. I would like to have the Attorney General call you or your people and I would like you to get to the bottom of it. As you saw yesterday, that whole nonsense ended with a very poor performance by a man named Robert Mueller, an incompetent performance, but they say a lot of it started with Ukraine. Whatever you can do, it’s very important that you do it if that’s possible.

Oh look, what a coincidence! The Co-Founder of Crowdstrike is a Senior Fellow at the Atlantic Council. Well, that’s if one believes in coincidences–especially in this case–I don’t.

PS: The Co-Founder of Crowdstrike is a Senior Fellow of the think thank. 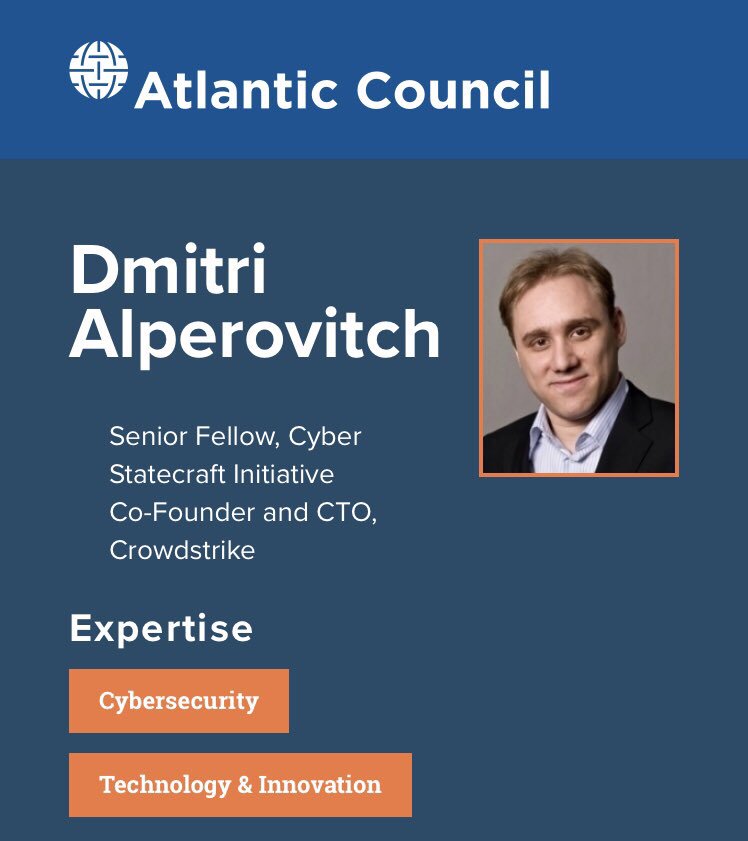 2,146 people are talking about this

Now, does conducting a secret meeting with a foreign leader who was duly replaced by a rival in an election count as foreign meddling?

And with all the obvious political connections in the groups we’ve cited — not to mention a meeting with a defeated politician, politically aligned with the Obama administration — was he candid in checking ‘no’ to the ‘foreign lobbyist’ box?

One of the interesting things about the treaty William Jefferson Clinton signed with Ukraine is our ability to discuss issues of Corruption… which means Trump a conversation between Trump’s DOJ and Ukraine’s counterparts is entirely appropriate.

“To the Senate of the United States: With a view to receiving the advice and consent of the Senate to ratification, I transmit herewith the Treaty Between the United States of America and Ukraine on Mutual Legal Assistance in Criminal Matters with Annex, signed at Kiev on July 22, 1998. I transmit also, for the information of the Senate, an exchange of notes which was signed on September 30, 1999, which provides for its provisional application, as well as the report of the Department of State with respect to the Treaty. The Treaty is one of a series of modern mutual legal assistance treaties being negotiated by the United States in order to counter criminal activities more effectively. The Treaty should be an effective tool to assist in the prosecution of a wide variety of crimes, including drug trafficking offenses. The Treaty is self-executing. It provides for a broad range of cooperation in criminal matters. Mutual assistance available under the Treaty includes: taking of testimony or statements of persons; providing documents, records, and articles of evidence; serving documents; locating or identifying persons; transferring persons in custody for testimony or other purposes; executing requests for searches and seizures; assisting in proceedings related to restraint, confiscation, forfeiture of assets, restitution, and collection of fines; and any other form of assistance not prohibited by the laws of the requested state. I recommend that the Senate give early and favorable consideration to the Treaty and give its advice and consent to ratification.”
Source: Congress

How delicious would it be if a treaty signed by Bill Clinton helped get to the bottom of what REALLY happened with the plot to take down Trump… or better still (considering the Crowdstrike implications) Hillary’s missing emails.

Now that we see some of what’s been going on behind the scenes, this is looking more and more like Kavanaugh hit 2.0.

And since Schiff has directly approached a defeated foreign president, doesn’t this — by the rules of his own game — constitute ‘foreign collusion’ and ‘meddling’?

By normal rules it reeks of corruption and falsely accusing President Trump, with the purpose of overturning the 2016 election.

How much cooperation — or possibly even coaching — of the supposed whistleblower was provided by Schiff or any of his surrogates? Because this is looking more and more like an orchestrated hit against a duly-elected President by people who had loathed him and had it in for him from before the day he took office.

There needs to be an investigation of the Bug-Eyed Burbank Barrister.  America needs to know if these suspicious actions were an attempted coup d’etat.