I bet PMSNBC reporter Kerry Sanders got taken to the liberal woodshed after this report being so Pro-Second Amendment.

MSNBC reporter Kerry Sanders unwittingly made the American case for the Second Amendment during a report Tuesday on the political upheaval in Venezuela.

Anchor Andrea Mitchell introduced Sanders for his report by commenting on the surprising ability of Venezuelan dictator Nicolás Maduro to stay in power, despite the pressure on him to step down.

“Not only hanging on but he appears to still control the military,” Sanders said. “You have to understand, in Venezuela gun ownership is not something that’s open to everybody. So if the military have the guns, they have the power and as long as Nicolás Maduro controls the military, he controls the country.”

Maduro’s socialist regime has presided over economic devastation in Venezuela, where citizens are beset by rising prices and food and medical shortages. The country banned private gun ownership in 2012 under Maduro’s authoritarian predecessor, Hugo Chavez.

The Associated Press reports that opposition leader Juan Guido took the streets to protest Maduro’s government and called on the military to join him:

Anti-government demonstrators clashed with troops loyal to Venezuela President Nicolas Maduro at an air base in the capital hours after opposition leader Juan Guaidó took to the streets in a bold and risky attempt to lead a military uprising against the embattled socialist.

The early-morning rebellion seems to have only limited military support.

But it was by far the most-serious challenge yet to Maduro’s rule since Guaidó, with the backing of the U.S. and dozens of other countries, declared himself the country’s interim president in January in rejection of a government he accused of stealing last year’s presidential election.

The dramatic events began early Tuesday when Guaidó, flanked by a few dozen national guardsmen and some armored crowd control vehicles, released a three-minute video filmed near a Caracas air base in which he called on civilians and others in the armed forces to join a final push to topple Maduro.

Some of the clashes were captured on video. One showed Maduro soldiers in an armored vehicle running over protesters.

Venezuela: military running over civilians on the street now. 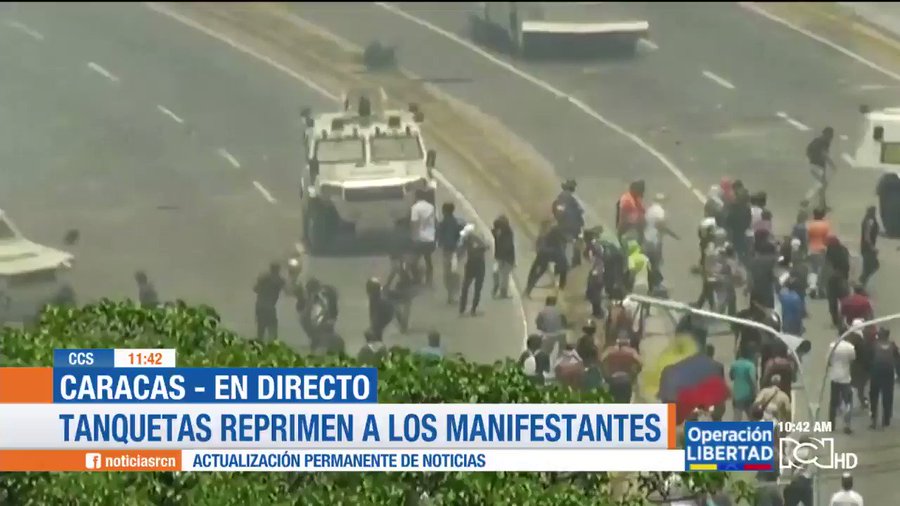 69 people are talking about this

The Second Amendment in America will help provide a barrier between the oppressor and the oppressed.

Right now, things are dicey for Venezuelan strongman Nicolás Maduro. It seems he’s not particularly popular with the people. They’re protesting something fierce, which is leading to the socialist dictator cracking down on dissent.

In the process, it’s illustrating one very important thing. If you have to deal with a tyrant, you need an armed populace.

Guaidó declared that “the moment is now” for citizens and the military to turn on Maduro and remove him from power.

But at least some citizens say that would be easier if the government hadn’t banned guns.

“Guns would have served as a vital pillar to remaining a free people, or at least able to put up a fight,” exiled English teacher Javier Vanegas told Fox News. “The government security forces, at the beginning of this debacle, knew they had no real opposition to their force. Once things were this bad, it was a clear declaration of war against an unarmed population.”

Citizens in Venezuela have been unable to own private firearms since the country enacted a ban in 2012 under previous leader Hugo Chávez. The law only allows the military, police, and specific groups, i.e. security groups, are allowed to purchase firearms from state-controlled manufacturers. Those in violation could face up to 10 years in prison if in possession of a “weapon of war.”

The ban was originally meant to curtail the high murder rate in the country, which saw over 18,000 homicides in 2011. After a low surrender rate, the government invested heavily in seizing weapons from citizens instead.

Of course, that’s the Washington Examiner, which tends to be saner when it comes to guns, thankfully.

However, even the typical anti-gun media is seeing the truth of this. I mean, when even MSNBC is stating this, you know it’s serious.

How long have I lived? Long enough to see a mainstream media outlet other than Fox News make a core Second Amendment argument. And guess who it is?

All right, all right, MSNBC didn’t know they were making a core Second Amendment argument. They were just reporting on the captivity of Venezuelans by a socialist regime that made sure to ban gun ownership. Six of one, half-dozen of another, says the Free Beacon:

MSNBC reporter Kerry Sanders unwittingly made the American case for the Second Amendment during a report Tuesday on the political upheaval in Venezuela.

Anchor Andrea Mitchell introduced Sanders for his report by commenting on the surprising ability of Venezuelan dictator Nicolás Maduro to stay in power, despite the pressure on him to step down.

“Not only hanging on but he appears to still control the military,” Sanders said. “You have to understand, in Venezuela gun ownership is not something that’s open to everybody. So if the military have the guns, they have the power and as long as Nicolás Maduro controls the military, he controls the country.”

And that, ladies and gentlemen, is why I will support the Second Amendment to my dying breath.

For better or worse, guns equal power far more often than any of us would prefer. It’s like the old saying; God created all men, Sam Colt made them equal. The evil in this world will obtain guns (and power) in any way it can, so it’s imperative that the good people of the world not be barred from doing so themselves, especially since laws meant to impact the evil almost never do.

It’s interesting that even MSNBC has stumbled onto the truth, though I suspect it’ll view that as completely different. Which is also hilarious when you think about how many times President Donald Trump has been called some variation of “dictator,” “Hitler,” or something similar. The Left doesn’t trust him, but they still want him to have all the guns.

It would be nice if the Left would look at what’s happening in Venezuela, remember that they think our president is a dictator, and then realize that they want to make it even more difficult to fight a dictator on American soil.

Unfortunately for all of us, they’re not that self-aware.